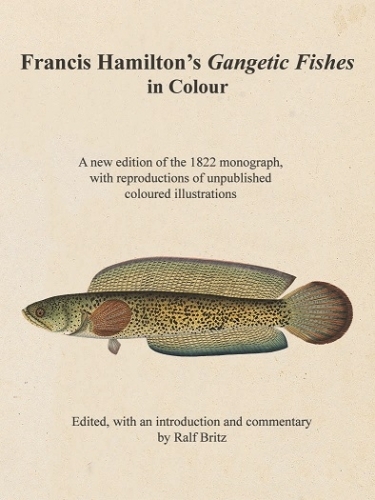 Francis Hamilton-Buchanan’s ‘Gangetic Fishes’ when published was a milestone in Asian natural history for its comprehensive treatment of the subject and the revolutionary accuracy of its fine illustrations.  However, the wonderfully accurate coloured drawings made from freshly caught fish specimens, by native artists under Hamilton Buchanan’s supervision were only published in black and white. This shortcoming in the original publication has been the source of conjecture and misunderstanding over the identity of some of the fishes described in the book ever since. The present volume, using sets of original coloured drawings and field notes from several sources presents for the first time a full set of accurate colour reproductions with an in-depth commentary providing valuable further information. It will be an invaluable reference for scholars, aquarists, and art historians as well as a showcase of the brilliant work the artists produced under Hamilton-Buchanan’s direction.

Ralf Britz, who is German by birth, received his PhD from the University of Tübingen, Germany. His research interests include comparative anatomy, development and evolution of fishes and taxonomy and systematics of Asian freshwater fishes. He has published over 135 scientific papers and several book chapters, during a distinguished career in Ichthyology spanning some 24 years including the last 15 years as senior Fish Researcher at London’s Natural History Museum.

He took the opportunity of his appointment in London to track down the surviving sets of coloured Hamilton drawings, as well as field notes in British academic libraries. The resulting compilation represents the culmination of a lifelong academic and personal relationship with this classic volume.

Francis Hamilton (formerly Buchanan) was an eminent naturalist, equally skilled in botany and zoology, especially ichthyology. He was a surgeon with the Honourable East India Company between 1794 and 1816 and spent 18 years in India, also travelling to Burma and Nepal. He is famous among ichthyologists for his monograph on Gangetic fishes, which was published in 1822 covering 272 species of freshwater and brackish water fishes and the original coloured drawings made by the Indian artist Haludar under Hamilton’s supervision. Hamilton drew up species descriptions and had the fishes drawn while they were still alive, so that his descriptions of the different species and their beautiful coloured illustrations are unusually detailed and accurate. Many were omitted from the book and those that were included were only published in black and white.

Click here for additional notes by Ralf Britz on the Field notebooks of Hamilton with links to the scans of the notebooks from the British Library.

Click here to read a review published in the journal Copaeia presented with permission of the American Society of Ichthyologists and Herpetologists.